Today is the day after… The day after the eve of 5 December with celebrations of the traditional winter holiday figure Sinterklaas in the Netherlands and various other countries. Today is the day of the German figure Sankt Nikolaus. If you do a bit of research you find other closely related figures celebrated in other cultures. Santa Claus is famously celebrated on Christmas Eve and is the more modern figure of the lot.

Having some not-so-nice and mostly great memories on Dutch Sinterklaas, when abroad, how does one go about explaining the ins and outs in a politically correct manner? As a young child, I was scared of the man. But then the final turning point came when I helped Sinterklaas and transformed into a Zwarte Piet. Not a black swan but one of the many black helpers of Sinterklaas (Black Petes). On to some context for this story.

5 December is originally the name day of Saint Nicholas, who is the patron saint of amongst others children and the city of Amsterdam, see image. History on Sinterklaas, and related foreign figures, goes back possibly to pre-Christian Europe. Dutch tradition is that Sinterklaas is from Spain, comes to the Netherlands in a steamboat and, as mentioned above, has black servants with colourful clothes. Historical explanations consist of respectively Sinterklaas’ remains being in then-Spanish territory, Sinterklaas’ patronage of sailors, and Spain was part of the Moor empire at the time. Lately the latter has also been explained because Pete has to climb down dirty chimneys to deliver gifts.

Some other elements part of the tradition: 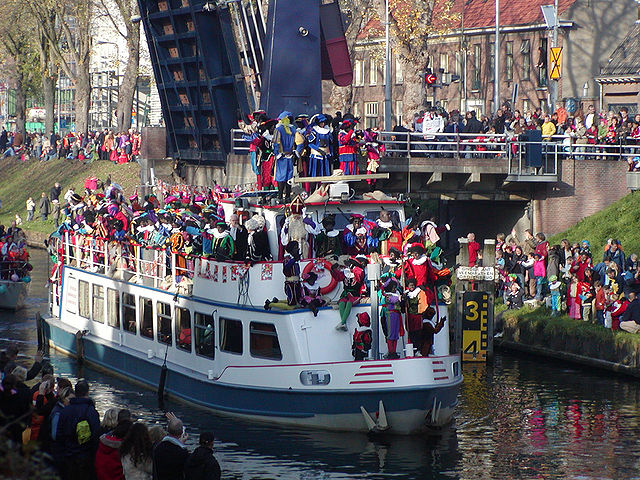 Well, this story may explain the tradition and do some justice to it. I have had some funny conversations explaining it to people not familiar with Sinterklaas and who are from a different heritage.

While going through all this I relived some wonderful memories. I have had some scary moments, fun moments and moments full of emotion. These words are not complete in explaining everything Sinterklaas has brought. But I think giving, thankfulness, sharing, cheering, learning to overcome fears and transform into more positive emotions (here by joining them), fun, and playfulness are virtues we can all value and celebrate.